*Bookings for the summer are possible from February

France, the pioneer of high-speed rail in Europe. TGV, Eurostar and Thalys connect Paris with all important cities in France and Europe with speeds up to 330 km/h. Discover the most beautiful landscapes, cities and railway routes with the French Railways SNCF.

SNCF (Voyages) is the name of the railways in France.

The high speed train of SNCF Voyages is the TGV. The TGV connects all major destinations in France and many big cities in countries nearby like Spain, Switzerland and Italy. On some routes like Paris to Marseille, Paris to Bordeaux and Paris to Strasbourg the TGV reaches speeds up to 300km/h. Paris-Marseille takes just 3 hours, very fast seen the distance of 700 kilometers.

The promo fare of SNCF is called Prem's and is available 3 months before departure (train tickets for the summer are available from February) The Prem's fare availability is very limited.

Here at HappyRail you can buy all domestic and international train tickets from SNCF Voyages at the same price. 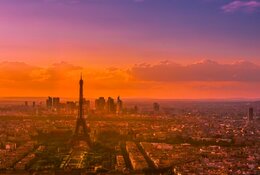 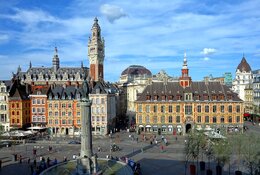 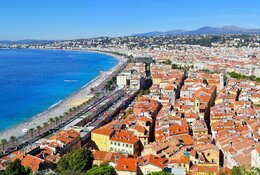 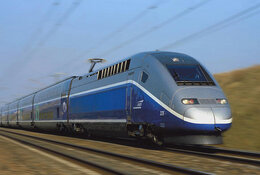 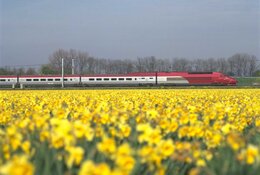 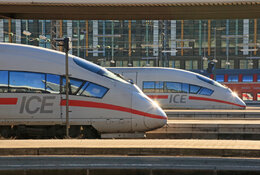 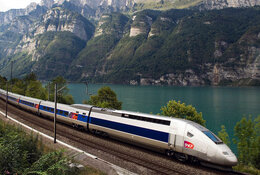 How to book cheap train tickets in France?

For all TGV and long-distance trains reservation is compulsory and your ticket is fixed to a certain date and time. Fares start at only €15 for short-distance journeys like Paris-Lille. Longer journeys start at €25.

Early booking for the cheapest fares is recommended, especially for the weekend and holiday dates. Booking opens 3 months in advance, in some cases/on some routes earlier.

Fares for regional TER-trains are based upon a price per kilometer and reservation is not compulsory. Tickets for regional trains are valid on later trains within the period of validity of the ticket.

Fares start for €35 for the Thalys Amsterdam-Paris,  €59 for Eurostar London-Paris and €49 TGV Barcelona-Paris. Early booking is recommended to get the best fares, booking opens 4 months for departure for international TGV and Thalys, 6 months for the Eurostar.

How to travel by train to/in France

Trains London to Paris
London and Paris are connected by Eurostar-services through the Channel Tunnel; trains run almost every hour (travel time about 2h16min).

Thalys also offers a low-cost service calls “Izy”, which operates 2 times a day between Brussels and Paris. Fares for this train are cheaper, but the travel time is also 2 times longer as it runs over the old railway and not over the high speed line.

Trains Germany to Paris
From southern Germany there are 2 different routes to Paris. From Frankfurt to Paris 4 ICE’s and 1 TGV run daily to Paris, the travel time is about 3h50.

The other route is from Stuttgart (3h40min) via Karlsuhe and Strasbourg and is serviced by TGV-trains, 4 times daily. One train starts/ends in Munich (6h10min).

The city of Freiburg in Breisgau is also connected by 1 daily TGV , travel time 3h45min. Luxembourg has 6 daily TGV’s to Paris.

Trains Russia to Paris
The Russian Railways operate a 3-weekly night train from Moscow, Minsk, Warsaw and Berlin to Paris.

Trains Switzerland to Paris
From Switzerland connections are offered by TGV Lyria, a co-operation of SNCF and Swiss Federal Railways SBB. Four TGV’s connect Basel with Paris (travel time 3h4min), of which one starts in Bern and three in Zürich, one service operates from Paris to Interlaken in the Bernese Oberland, but there is no return service.

The Swiss city of Lausanne is connected with 5 daily TGV’s (3h40min), Geneve is being served by 8 TGV’s daily to Paris, travel time is 3h10min.

Trains Spain to Paris
From Barcelona to Paris a co-operation of RENFE and SNCF offers daily TGV’s to Paris, 2 daily trains from November to March, 4 trains in summer. A night train offering seats and couchettes  runs from the border station La-Tour de Carol in the Pyrenees to Paris, with a connecting service from Barcelona available. The daily Sud-Express runs from Lisbon to the border station of Hendaye, with a connecting TGV to Paris.

As scenic alternative there is a night connection from the border station Latour-de-Carol to Paris with a connecting service from Barcelona available.

The suburban Rodalies-train leaves Barcelona Sants about 15.00 (time varies depending the day) and arrives in Latour-de-Carol at 18.15, the route is very scenic with the train winding his way trough the Pyrenees.

The connecting night train leaves Latour de Carol at 20.20 and arrives Paris next morning at 07.24.

The return service from Paris leaves 21.39, arriving in Latour-de-Carol at 07.51, the connecting Rodalies-service to Barcelona leaves at 08.50 with arrival in Barcelona at 11.56.

Trains to Lille
The city of Lille in northern France is connected by Eurostar from London, all trains (6-9 each day) from London to Brussels call here. Frequent TGV’s als run from Brussels via Lille to the Southern of France bypassing Paris. Thalys operates a direct service from Amsterdam to Lille, mostly 2 trains each day. Belgian Intercity services run from Antwerp and Ghent to Lille every 2 hours.

Trains to Strasbourg
The eastern city of Strasbourg is connected by frequent local trains from Germany (Offenburg and Switzerland (Basel). TGV-trains from Stuttgart and Karlsruhe to Paris also call at Strasbourg. A daily Thalys operates from Brussels to Strasbourg.

Trains to Lyon
The southern city of Lyon has international connections from Switzerland, regional trains run every 2 hours from Geneve to Lyon. A daily TGV connects Lyon with Frankfurt in Germany.

TGV-trains from Barcelona to Paris also call in Lyon (2 to 4 trains daily), a Spanish AVE-service is also running from/to Lyon each day.

One of the three daily TGV’s Milano-Paris calls at the Lyon Airport of St Exupery. TGV’s run from Brussels to Lyon almost every 2 hours.

Trains to Nice, Avignon and Marseille
Thello operates three daily EuroCity-connections from Milano and Genova to Nice of which one continues to Marseille.

A daily TGV operates from Brussels to Nice and other cities at the Côte d’Azur. The Russian Railways operate a weekly night train from Moscow, Minsk, Warsaw, and Vienna to Nice. Also a daily TGV runs from Geneva to Nice Ville. Regional trains operate from Ventimiglia to Nice and Tende to Nice.

Thalys offers a summer-season direct service from Amsterdam and Brussels to Valence, Avignon and Marseille. This service runs every Saturday from late June until half August.

Trains to Toulouse and Bordeaux
A daily AVE runs from Barcelona to Toulouse in southern France from early April to late August. There are no direct trains from abroad to Bordeaux, but this city is easy reachable with changing trains in Lille or Paris.

Route of the Cevenol-train through the Auvergne. This route runs through scenic Allier-Valley which is only accesable by train.

Narrow-gauge route to the winter sport resort of Chamonix continuing to Martigny in the Rhone Valley in Switzerland.

Route from the Mediterranean coast/Rhone Valley up to Gap and Briancon in the high Alps.

Route along the Côte d'Azur to Nice and Italy via Toulon, Cannes, Antibes and Monaco.

The famous "Train Jaune" (Yellow Train) through the Pyrenees to the Spanish border station of Latour de Carol. Connecting service to Barcelona available.

Insider tip: Travel with the "Train des Pignes" from Nice to Digne: This narrow gauge railway runs from Nice at the Côte d'Azur to Digne in the middle of the Provence/Alps. The panoramic carriages runs through the suburbs of Nice, continuing to the lavendel flowers of the Provence finally arriving in the Alp town of Digne. Trains run 3 or 4 times daily, depending on the season.

We've selected the following hotels in France based on the location near the train stations. These hotels offer a comfortable stay for good rates.

Paris: Hotel Terminus Nord
Famous hotel opposite the Gare du Nord, ideally located when you're arriving by Thalys or Eurostar.