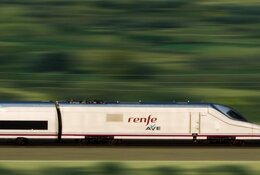 What is the name of the main station in Barcelona?
Barcelona-Sants is the central station. Barcelona-Franca is also a train station of importance.

Can you walk from the station to the (old) city centre?
The train station is about 40 minutes walking from the city centre Ramblas.

Which trains run to Barcelona?

Are there direct trains to major cities nearby?
Yes, to many cities like Zaragoza, Madrid, San Sebastian, Pamplona, Léon, Córdoba, Sevilla, Màlaga, Alicante, València and many other places in Spain. Also international trains to France, to cities like Perpignan, Narbonne, Montpellier, Valence and Paris.

About Barcelona
Travel by the high speed trains AVE from Madrid and TGV from Paris to Barcelona. Explore the vibrant city centre with the harbour and the Ramblas. Visit the Sagrada Familia or the Gaudi Museum. The Barcelona Sants station is near all the sights and has many direct connections to major destinations in Spain and France.

Barcelona Sants is the name of the main station in Barcelona. AVE-trains run very regularly to Madrid, Valencia and Seville. TGV-trains run 2-3 times a day to Paris, Lyon and Marseille.

To the city centre (Ramblas)

Barcelona Sants - Hotels near the station