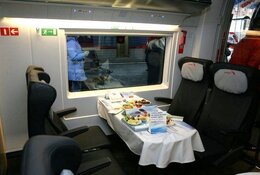 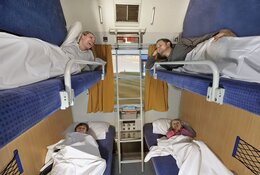 What is the name of the main station in Moscow?
If you arrive from one of the most European countries, Moscow Belorusskaja is the central station.

Can you walk from the station to the (old) city centre?
If you are planning to go to Red Square, it is best to take the metro or a taxi.

Which trains run to Moscow?

Are there direct trains to major cities nearby?
Moscow is a hub in the rail network. From here you can go to many places in Russia and beyond, such as the former USSR countries, Mongolia, China and Europe.

About Moscow
Moscow is the capital of and by far the largest city in Russia, formerly the USSR. It is no different for large European cities and is an accessible, modern city in its own way. From here, people often travel on a journey through the gigantic country, for example by Trans-Siberia Express or towards one of the former USSR countries.

Moscow Belorusskaja - Hotels near the station

Find all popular trains in Russia. Within Russia you can travel with the Sapsan trains. The Sapsan is a high speed train between Moscow and St. Petersburg. It has first and second class and meal services on board the train. The train tickets can be booked 60 days in advance.